Presenting a CXC Report on the Costs of Offshore Wind to Industry Leaders in Rhode Island, USA 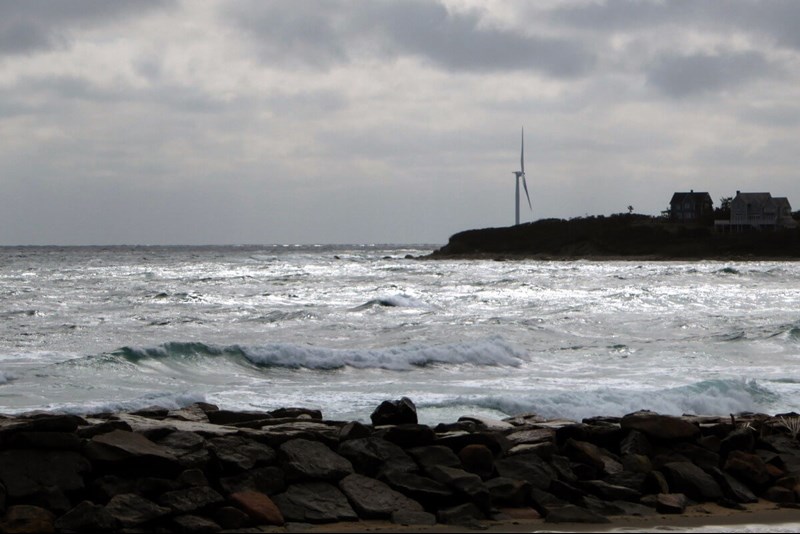 Last month the 2017 International Offshore Wind Partnering Forum took place in Maryland, USA. I was lucky enough to be invited to speak at the 2016 conference 6 months ago, and really enjoyed my experience. The organisers had read the report that we produced for ClimateXChange entitled Life Cycle Costs and Carbon of Offshore Wind Power, and were keen for me to attend to present our findings at a workshop on the life-cycle costs of offshore wind. This was an excellent opportunity to connect with industry leaders in offshore wind in the USA, which is an emerging market, and also to further promote the research being funded by ClimateXChange.

The 2016 International Off­shore Wind Partnering Forum took place from the 2nd to 5thOctober 2016, at the Hotel Viking in Newport, Rhode Island. It was the 3rd conference in a series organised by the Business Network for Offshore Wind, whose primary aim is to develop the offshore wind industry in the USA, and was attended by over 500 delegates, mainly from the USA and Europe. These included a mixture of people from industry, academia and government, and I met many of these, including members of the British Embassy in Washington and Scottish Development International.

The keynote speakers included members of several different levels of government and also from a number of national government-funded laboratories, as well as industry. In addition to the keynote speeches, the conference included 26 parallel sessions on a broad range of topics. Of particular interest were the sessions on “Innovation to mind-blowing technologies”, highlighting some of the cutting-edge technological and manufacturing innovations in the wind industry, “Priming the grid for green”, focussing on the grid connection requirements and challenges of offshore wind, and “Technology drivers behind emerging markets”, which focussed mostly on innovative floating turbine technologies. I found that the issues discussed in these sessions were highly relevant to any offshore wind market, including that in Scotland.

I was particularly interested in the challenges faced by the offshore wind industry in the USA, even when considering that this conference was held before the most recent political events affecting the US renewable energy industry. The USA currently has only one commercial offshore wind farm, at Block Island, but there is significant wind resource along both coastlines. Furthermore, this wind resource is near to the load centres, as many of the country’s major cities are on the coast. This means that there is significant scope to exploit this wind resource, but there are a number of constraints not faced by developers in the UK that are restricting development.

I found the challenges of the west coast particularly interesting; not only is the sea bed steeply sloped, such that it is too deep for most existing technologies, but any offshore wind farm here would also need to be designed to survive earthquakes. For this reason, the development of floating solutions are being followed with interest.

Another challenge that offshore wind in the USA faces that is not seen in the UK is that created by the Jones Act. This law restricts certain activities in US waters to qualified US-built, US-flagged vessels, meaning that many of the specialist vessels currently in use in Europe cannot be used in the USA. While the offshore wind industry in the USA is still in the early stages, there is little incentive to build specialist vessels solely for the US market, and this adds a level of complexity to the construction of offshore wind farms in the USA.

A third interesting challenge for offshore wind in the USA is that of icing. This is of particular relevance for the Great Lakes; although not strictly-speaking “offshore” there is a significant wind resource in these Lakes, but current technologies are not thought to be able to survive the extreme winter conditions that they experience.

In addition to the plenary sessions and educational workshops, there were several networking sessions, which provided plenty of opportunities for making new contacts, and discussing the research being carried out through ClimateXchange and at the University of Edinburgh. There seemed to be quite a lot of interest in the ClimateXchange funding model for academic research, in particular with the direct contact that ClimateXchange fosters between researchers and the Scottish Government.

The Life-Cycle Costs of Offshore Wind

This session took place at the end of the conference, and was attended by approximately 25 delegates from both academia and industry. My brief was to provide an introductory overview of the published body of knowledge on costs of offshore wind, and the presentation was well received. Questions from delegates were mostly centred on the Levelised Cost of Energy (LCOE) methodology, the necessary assumptions and associated validity of the results. There are significant limitations to this methodology, particularly with reference to the financial factors such as discount rate and taxes, and some of the following presentations examined these.

My presentation was followed by those from speakers from UMass Amherst, John Hopkins University, the University of Maryland, Atlantic Wind Connection and the National Renewable Energy Laboratory, examining a wide range of related topics. Unfortunately, the session overran slightly, and I was not able to listen to all of the speakers, but a brief description of a selection follows:

In order to keep costs as low as possible for this trip, I had to make sure that I spent a Saturday night in the USA (due to a restriction imposed by many transatlantic flight operators). This meant that I was lucky enough to get a Sunday to spend exploring Newport before the conference.

Newport has historically been, and remains, a popular destination for American tourists. Unlike much of the state of Rhode Island, it is on an island, so the town has both an eastern and western sea front, and seafood is a staple of many of the restaurants. Newport is famous for its mansions, built along Bellevue Avenue in the late 19th century as “summer cottages” for the New York elite, including the Vanderbilts and Astors. I went for a lovely walk along the cliff walk, returning along Bellevue Ave, before exploring the town and harbour.

I found myself slightly nonplussed by the mansions, a feeling reinforced by a visit to one of them (Rosecliff) for a drinks reception on the first evening of the conference. They are all relatively modern in comparison to most of my home city of Edinburgh: all built after Edinburgh’s New Town, and contemporary with many of the stone tenement buildings that house a large proportion of Edinburgh’s population. None of the mansions, however, seem to reflect a particularly Victorian style, instead imitating the grand houses, palaces and chateaux of Europe in much earlier eras. Some are in private hands, but a handful (including Rosecliff and The Breakers, pictured) are open for visits.

I wonder whether the impression of these buildings as being somewhat artificial and as though built for a theme park is actually because they are much better cared for than buildings from a similar era that I’ve visited in Europe. They are certainly very impressive.

I found the town centre of Newport much more interesting than the mansions. It has some beautiful examples of traditional American houses dating back as far as the 18thCentury. It is mostly centred around the harbour with old warehouses now converted into restaurants and gift shops.

One of the highlights of this trip was the visit to the Block Island Offshore Wind Farm. This is the first offshore wind farm in the USA, consisting of 5 turbines, 4 miles off the coast of Block Island, not far from Newport. It became operational in December 2016.

Standing tall on their jacket foundations, these 6MW turbines are clearly visible from the island, but it was still a treat to see them up close from a boat. We were taken right up to the foundations and were able to view the nacelle from beneath. It is difficult to capture the scale of these turbines in a photograph.

Throughout my visit to Rhode Island I was struck with the pride that the locals in Newport (not just conference delegates) displayed in hosting the country’s first offshore wind farm. Despite, or perhaps because of, the wind farms’ visibility from Block Island, I heard that it is becoming a tourist attraction in its own right, which seems a contradiction for a region known for the beauty of its coastline. In addition, the project has resulted in the local network operator, National Grid, providing a connection from Block Island to the mainland for the first time, breaking the island’s dependency on expensive diesel generators. (The cable also includes a fibre-optic link for improved broadband connectivity for island residents.) This has helped to win the support of the local community for the wind farm project.