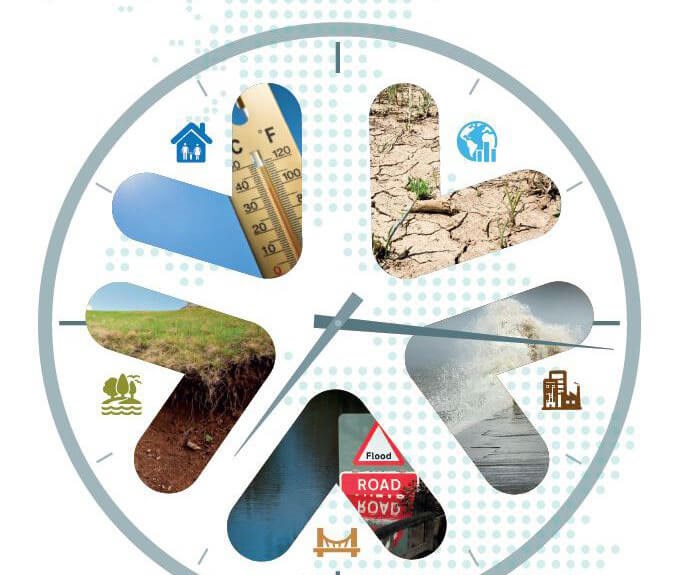 London offered a strong wind and heavy showers following the launch of the Committee on Climate Change’s assessment of the risk from climate change to the UK’s society, economy and environment. It seemed an apt comment on the content of the report – climate change poses real risks to the UK, and the need for action is urgent. For the UK climate change is likely to lead to periods of too much or too little water, increasing average and extreme temperatures, and sea level rise. That will change the everyday life of each one of us.

The UK Climate Change Risk Assessment Evidence Report is a 2000 page publication documenting the impacts climate change is having and will have under even the most conservative emission scenarios. The eight chapters are written by leading academics, consultants and other experts in the public and private sectors and civil society representing organisations across the UK.

The full report has had input from workshops in all the UK administrations and been subject to two rounds of review by stakeholders, technical peer reviewers and other organisations. Separate summaries are published for England, Northern Ireland, Scotland and Wales to assess local variations and inform adaptation planning by the UK and the devolved governments.

The risks set out are not new, and we have ways to deal with them. However, we know that the risks will compound each other and we need to act long before we know the full extent of how our climate will change. We are facing an urgency of action – practical and in terms of research – rather than an urgency of risk. The Committee says the top risks are characterised by the need for additional, co-ordinated steps to be taken within the next five years if we are to adapt our society and our economy. Failing to take this action will substantially increase the cost of dealing with the impacts when they arise. So what does the report say? The report considers the urgency of further action to tackle current and future risks, and realise opportunities, arising for the UK from climate change.

Almost 60 individual risks and opportunities have been assessed as part of the process. At a UK level the Committee identifies six top risks:

The risks in Scotland

Scotland has relatively lower temperatures and higher levels of precipitation than other regions of the UK. Our population lives spread over a large area. This means the adaptation challenges are different from those for example in the South of England. However, the Committee found limited Scotland specific data on many of the issues the report covers.

What we do know is that Scotland is very important in providing carbon sequestration: At 15% of land cover, Scotland has the highest proportion of woodland area in the UK with over 1.2 million ha. As a result, over half (55%) of the 15 million tonnes of CO2 sequestered by UK forests is in Scotland.

We also know that the risk of river and surface water flooding is expected to rise, as patterns of rainfall become more intense. For western areas of Scotland in particular this could mean significant increases in heavy winter rainfall.

One issue that makes comparisons or even whole UK-assessments complicated is the difference in how the administrations assess flood risk. Flood Risk Management Strategies in Scotland are based on a suite of flood hazard and risk information. This suite includes high probability (1 in 10-year), medium probability (1 in 200-year) and low probability (1 in 1000-year) flood scenarios in addition to a consideration of the impacts of climate change. The 1 in 75- year return period used in the CCRA2 due to its UK-wide suitability is not included in the Scottish flood hazard suite.

The report says that there is a need to develop consistent indicators of infrastructure network resilience to flood risk across all critical national infrastructure sectors. This will help to create the right institutional conditions for adaption. Consistent indicators of resilience will allow for improvements to be measured over time, so enabling better decisions in the near future, especially in relation to longer-term major risks, i.e. to build early interventions within an iterative adaptive management framework.

Scotland is home to unique flora and fauna. The report describes a range of actions that would help different species, habitats and ecosystem functions to meet adaptation objectives. How this toolbox is to be used is a further challenge – there are knowledge gaps, cost limitations, long lead-in and lag time effects, incompatible objectives and unexpected outcomes within wider environmental change. The Evidence report suggests Scotland should develop a process of clear prioritisation, perhaps based around the ecosystem functions and services deemed to be of most value.

The report also points out that, unlike the rest of the UK, Scotland has a statutory Land Use Strategy (LUS). This has established a series of principles and proposals for sustainable land use that explicitly account for the changing suitability of land for agricultural and forestry production. It is expected that land use planning will continue to protect prime agricultural land from development.

The Committee suggests that Scotland should take further action to improve the condition of degraded soils, restore peat habitats, better protect soils from damaging practices and encourage the wider uptake of soil conservation. Measures to reduce erosion (e.g. cover crops) or the impacts of erosion (e.g. buffer strips) could be targeted better towards vulnerable locations. Long-term monitoring of soil health, in terms of soil organic carbon levels, erosion rates and soil biota is also needed, particularly of carbon-rich soils. This monitoring should be linked to different land management strategies to address knowledge gaps of the magnitude of this risk and its geographical variations. This will have a range of co- benefits for managing a wide range of climate and non-climate related risks and avoid lock-in to a pathway where the UK’s most fertile and carbon-rich soils are lost at some point in the future.

ClimateXChange welcomes these recommendations. They fit with our programme of soil and peatland research. We work closely with stakeholders across agriculture, forestry and planning to reduce the risk from all the issues raised in the UKCCRA2 in relation to our land and soil.

ClimateXChange Manager Ragne Low was involved in the early stages of scoping chapter 8, which considers crosscutting issues and interdependencies. Her involvement was around ensuring appropriate representation of Scotland as a Devolved Administration and as a distinctive set of geographies for climate risk. CXC as a whole has also been central in collating evidence and advice to the ASC to reflect Scotland’s particular characteristics in terms of climate change risks. Key to this was CXC’s development of the first national set of indicators of climate change adaptation in Scotland. We hope these can be used over time to track progress, and that we will also be able to address the data needs that both our work and the CCRA2 Evidence Report highlight.

CXC is working in the area of infrastructure resilience, working with the National Centre for Resilience, infrastructure operators and responsible authorities. We will collaborate to build on our existing indicators suite to ensure it is as useful as possible in addressing the issues thrown up by the Evidence Report. We will continue our support for Scottish policy makers on emerging areas like expanding our knowledge about the risks from climate change to offshore renewable energy generation – this is a bigger issue in Scotland than in the rest of the UK.

CXC is already engaged both in the CCRA2 process and in the research-policy issues the Evidence Report raises. It is clear that this Evidence Report will set the agenda for tackling climate change over the next five years, and beyond. Key to that will be further research in the areas highlighted in the Report, in particular in Chapter 5 which deals with people and the built environment. There are significant knowledge gaps about the impacts of climate change on people, and our health and wellbeing in particular. CXC stands ready to take action to fill these knowledge gaps.

The first UK climate change risk assessment was published in 2012. Whilst the list of risks today is largely the same, the 2016 Evidence Report gives us new knowledge about the actions that are required to address those risks both at a UK and a devolved level. However, this is a high level report. Adaptation is an inherently local and context specific process – depending for example on the topography, industry, infrastructure and regulatory and governance structures locally. The Adaptation Sub-Committee will publish a separate independent assessment of progress towards implementing the objectives, proposals and policies in the Scottish Climate Change Adaptation Programme (SCCAP) in September 2016.