An overview of the Scottish Climate Change Plan update

December 2020 saw the publication of many documents that had been delayed due to COVID, including the CCC 6th Carbon Budget, the BEIS energy white paper, and the update to the Scottish Climate Change Plan.

In this blog, part of UKERC’s Decoding Policy Series I want to offer an overview of the Scottish Climate Change Plan update, for those who missed it. The update presents a path to meet Scotland’s climate change targets to 2032 and beyond. The Climate Change Committee (CCC) 6th Carbon Budget is referenced to offer comparison to a similar UK wide document.

The Scottish context
Scotland’s own emissions targets differ from the UK as a whole. The CCC has on many occasions suggested a more ambitious date for net zero in Scotland, due to the potential for negative emissions and renewables in the region. In 2019, a legally binding net zero date of 2045 was set by the Scottish Parliament, with interim carbon reduction goals of 56% by 2020, 75% by 2030, and 90% by 2040 compared to 1990 levels.

In particular, the 2030 goal of a 75% reduction exceeds CCC recommendations. The 6th carbon budget called the target “extremely challenging” and pointed out that neither their Balanced or Tailwinds net zero pathways for the UK would meet the target, reaching 64% and 69% respectively in 2030.

The Scottish Government also has to deal with the challenge of devolved and reserved powers. They do not have devolved powers to legislate for every sector (for example they can legislate on energy efficiency in buildings, but not electricity networks). Devolved policy areas cover only cover around 60% of total required abatement.

Buildings
In 2018 heating buildings caused more than 20% of Scottish carbon emissions. By 2030 the update says over 1 million homes – 50% of the domestic housing stock – will be retrofitted with electric heat pumps.

From 2024 new build properties must use low carbon heat, local area energy planning and energy efficiency measures will play a key role and strong commitments are placed on energy poverty reduction. More detail on enabling pathways will be offered in the Heat in Buildings Strategy, due for publication in early 2021.

Transport
The “Sustainable Travel Hierarchy” continues to be at the centre of the Scottish Government’s transport strategy, showing a commitment to moving beyond single occupancy vehicles as the core of the transport system. By 2030 they have targets to reduce car kilometers by 20% and to have phased out new petrol and diesel cars on the road while focusing investment on active travel and public transport. 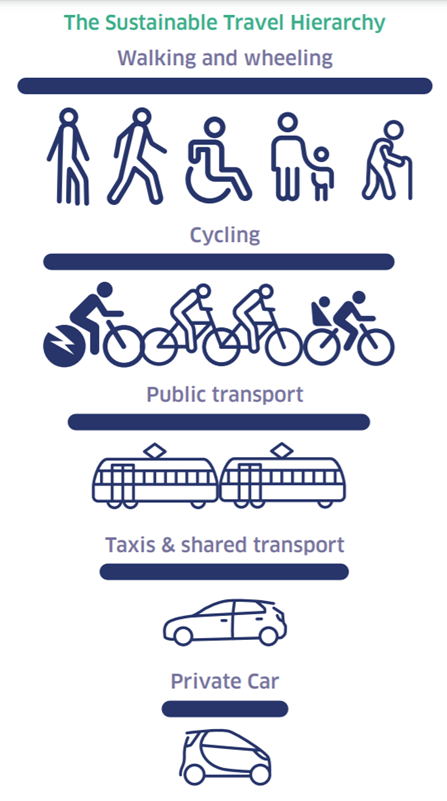 Electricity
The electricity sector in Scotland is already mostly decarbonised, with more than 90% of 2019 electricity coming from renewables. The challenge it faces is not the reduction of emissions, but scaling up as demand shifts from the gas networks and internal combustion vehicles onto the electricity network to facilitate decarbonisation of other sectors.

The key target is for the “2017 commitment to ensure all renewable energy accounts for the equivalent of 50% of our energy demand across electricity, heat and transport is successfully delivered” by 2030.

Land use
Scotland’s potential for carbon sequestration through forestry and peatland is one of the key reasons for the more ambitious targets. New commitments include planting 18,000 hectares of new forest a year from 2024/25 and a commitment to scale up peatland restoration.

Negative emissions
Negative emissions technologies, in particular the use of bio energy with carbon capture and storage will be used from 2029 and quickly scale to storing 10 MtCO2e a year by 2032 – equivalent to almost one quarter of Scotland’s 2018 emissions.

The same level is achieved for the entire UK by 2032 under CCC plans, including the planned retrofit of Drax power station.

The reliance on an unproven technology being deployed at scale has attracted criticism from a number of campaign groups including Friends of the Earth Scotland.

What next?
2021 will see the eyes of the world on Scotland with COP 26 being held in Glasgow in November. The pace of change and ambition shown in this document is exciting and if offer an exciting vision, hopefully over the next 12 months we will see more concrete pathways developed to match that ambition.

Read more about our energy expertise