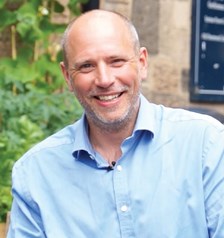 Prof Dave Reay is Chair in Carbon Management at the University of Edinburgh and Principal Investigator and Director, Policy, of ClimateXChange. Dave is also the incoming Executive Director of the Edinburgh Centre for Carbon Innovation (ECCI). This is his take on the 2020 climate year.

In climate science we often talk about ‘tipping points’: those triggers in the Earth system where, if we push too far, things flip into a whole new state. For most climate change tipping points we are unsure when exactly they might be passed – just how much more we can push the accelerator before things spin out of our control. But there is one fork in the global climate road that is all too stark, a tipping point that is about people rather than science. It’s 2020.

This year is of monumental importance for climate change action. November will see Glasgow play host to COP26 (the 26th ‘Conference of the Parties’) where all nations come together to set out what action they will take to deliver on the Paris Climate Goals. Achieving these goals – to keep global average temperature increase to well below 2 degrees Celsius and pursue efforts to limit the increase to 1.5 degrees Celsius – would massively reduce the negative impacts of climate change for centuries to come.

Current global climate commitments fall far short of the Paris goals and so the Glasgow COP – where new commitments through to 2030 will be set – represents a crucial (and likely final) chance to steer the world away from failure in the climate emergency.

Inevitably, the eyes of the world will be on Scotland and the UK in 2020. As developed economies with significant fossil fuel reserves we are grappling with the same urgent questions on how to achieve a sustainable and just transition to net zero emissions that most nations now face.

Scotland in particular has a lot of good progress to point to, having cut greenhouse gas emissions by 47% since 1990 while at the same time seeing its economy grow by more the 50%. Much of this success has come from decarbonising our power sector, with renewables replacing fossil fuels and 2016 marking the end of any coal-based power generation in Scotland.

As a nation we can highlight the huge level of public support for action, the strong engagement of both public and private sector in cutting emissions, and a legally-binding commitment to hit ‘net zero’ greenhouse gas emissions by 2045. There’s a lot of good policy and practice to share, but from now on in it gets really tough. With no more Longannet power stations to close, and emissions in key sectors such as transport, buildings and agriculture needing to fall rapidly, climate action in Scotland is set to get personal for us all.

From the cars we drive and the holidays we take, to the jobs we do and the food we eat, all facets of our lives will be affected in the push for net zero. Our landscape will change as woodland areas expand to sequester those emissions we cannot avoid, such as some of those from food production. New industries will emerge, requiring new skills and training, while major changes in some existing areas of our economy will test the commitment to achieve a ‘just transition’ to net zero to its core.

It’s daunting. But it’s also doable. In Scotland we have the public and political will to not only realise a sustainable net zero future for our nation, but also to help other nations do the same. With the help of ClimateXChange and others, the world-leading expertise in our Universities and research institutions is already combining with government, public and private sector partners to deliver the solutions we need. Whether its implementing large-scale technologies like Carbon Capture and Storage (CCS), or understanding human behaviour and local contexts, Scotland has the will and the way to stand in the glare of global scrutiny in 2020 and show the way forward. As tipping points go, this year can be the one that stops all the others in their tracks.

Read more about who we are